A Swiss Army ammo belt with a triple set of ammo pouches, hand-crafted from beautiful brown saddle leather. The leather is a beautiful rich dark brown color. It is very thick and waxy and has been hand-sewn by a specialist Swiss saddler. The belt is designed to be strapped across the body and would have originally carried bullets. These days would be useful for hunters, fisherman or other outdoor adventurers, to carry all sorts of small supplies. DIMENSIONS Length of three pouches together… 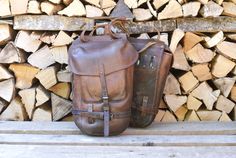 🇨🇭🐎An extraordinary set of Swiss Army leather pack saddle bags dated 1928, designed to carry an axe. These antique Swiss Army bags were originally carried by military horses. The bags were positioned around the neck area of the horse. A gorgeous and rare set in excellent condition! 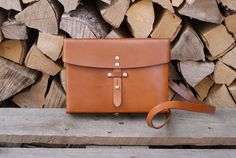 Like new, we don't think its ever been used. A Swiss Army leather messenger bag from 1978, made from caramel brown saddle leather in exceptional condition. Stamped 1970 🇨🇭St.Gallen-Swiss Army leather magazine holder. This bag is a model we have never seen before. The leather is dark brown, but so dark it almost looks black. The bag has four long compartments, probably for holding pistol magazines. 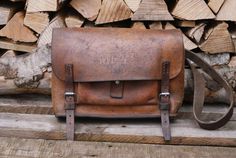 An extraordinary Swiss Army gunsmith bag from 1947, made from beautiful brown saddle leather, in very nice condition. This beautifully made, very high quality bag, called a 'Waffenmekanikertasche' in German, was originally designed for a Swiss Army gunsmith to carry tools for the repair and maintenance of the MP43 submachine gun. The MP43 was a blowback-operated submachine gun that was adopted from the Finnish Suomi KP/-31. `MP43 is stamped into the flap of the bag`. The bag appears then to… 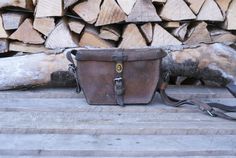 A very old and super-rare Swiss Army leather tool bag from the early 1900s, made from beautiful brown saddle leather, in excellent condition. This beautifully made, very high quality leather bag that once contained a Zielfernrohr, or a rifle scope for telescopic sight when aiming a rifle. The leather is beautifully aged. It is a rich dark brown colour and lovely and waxy. It is very thick and has been hand-sewn together by a specialist Swiss saddler. The work is of very high quality… 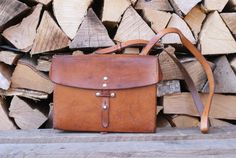 🗺️✏️📕This beautifully made, very high quality bag, called a 'Kartentasche' in German, was originally designed for Swiss Army soldiers to carry maps and other small items. This map bag is dated 1978. 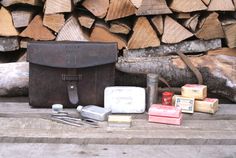 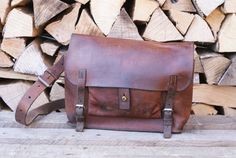 Swiss Army Gunsmith's leather shoulder bag dated 1929. This beautifully made, very high quality bag, called a 'Waffenmekanikertasche' in German, was originally designed for Swiss Army soldiers to carry tools for the repair and maintenance of weapons. 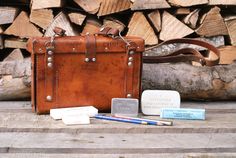 ⛑️🚁🤕A very special Swiss Army medical bag from 1982, in extremely good condition and with some of its original contents! The year 1982, the name of the leather worker and his town are stamped into the leather on the back of the bag. 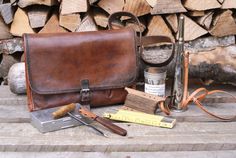 A very rare offer: a Swiss Army tool bag from the 1950s, made from beautiful brown saddle leather, filled with original contents. The previous owner of this bag told us that it belonged to his uncle, who in the late 1970s was an explosives expert, responsible for wiring Swiss bridges with explosives. During the Cold War, the Swiss Army rigged bridges and tunnels across Switzerland with explosives, ready to be detonated in case of a Soviet invasion and halt enemy tanks. 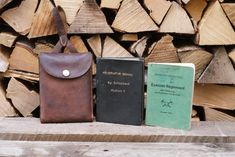 A lovely Swiss fireman's belt bag from 1935, made from brown pigskin leather. This little leather pouch contains all the rules and instructions for a firefighter at the fire station in Signau, Bern. The pouch can be hung on a rucksack or belt. 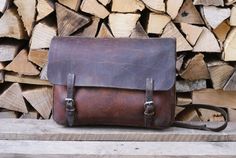 Swiss Military or Army messenger bag from 1938, made from very rugged, dark brown saddle leather, sewn together by a specialist Swiss saddler with cream-colored thread. This beautifully made, very high quality bag was originally designed for Swiss Army soldiers to use as saddle bags on horses. This bag was once one of a pair, connected by a chain and carried (one on each side) by the horse. The bag has had the chain removed and now has a Swiss Army leather shoulder strap attached so that the… 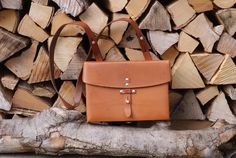 A Swiss Army leather messenger bag from 1988, made from caramel brown saddle leather. This bag is in excellent condition! This beautifully made, very high quality bag, called a 'Kartentasche' in German, was originally designed for Swiss Army soldiers to carry maps and other small items. 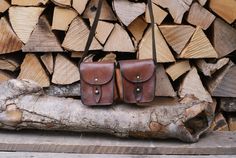 A brown leather French Army double ammunition pouch or case, with its original leather shoulder strap. There are many of these magazine pouches to be found but it is hard to find one with the strap. The French ammo case is hand-crafted from beautifully thick, brown saddle leather. In addition to the strap, there are belt loop holes and D-ring on the bag. 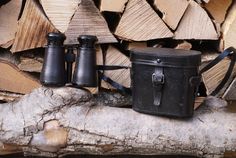 French Army Officer`s binoculars from WW1, contained in their original black leather binoculars case. We purchased these binoculars from the grandson of their original owner. He told us that his grandfather's name was Ulysse Vuille (1885-1982). He mentioned that that time, the optics were not encrypted, which is why they are simply called "de forte puissance", or high power. The binoculars are not marked. Only the case is marked with the name of the retailer: Bloch Optician Strasbourg…